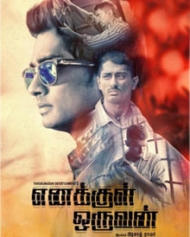 Enakkul Oruvan is a Tamil film directed by debutant Prasad Ramar and produced by C. V. Kumar, which is a remake of the 2013 Kannada film Lucia by Pawan Kumar. The film features Siddharth and Deepa Sannidhi in the lead roles, with Santhosh Narayanan composing the film's music.
Story
The film, from the beginning, tells two stories of the same person, one in color and other in black and white. There are two main roles, one that is played out in the dream, and the other one in reality. It is the story of an unassuming torch bearer Siddharth who works in one of the local theatres in the suburb of Bangalore. There are two main roles, one that is played out in the dream, and the other one in reality.
He leads a mundane life and suffers from insomnia. On one such sleepless night, he saunters out of his crowded shanty and bumps into a street-side drug peddler, who supplies him a magic pill called ‘Lucia’. Lucia(Drug) is said to have the capability to help one dream the life they want, but has the side-effect, that on discontinuation the same dreams shall turn into a nightmare. The dealer assures, would not only give him quality sleep, but would also help him in making his dreams come true.
Then begins Siddharth’s roller coaster ride with wild experiences. His ambitions, plans, thoughts, and imaginations are all intertwined with his nocturnal dreams. He meets a Pizza girl (Deepa Sannidhi) in his real life and same in his dream world, starts loving each other and then story lead to climax with ending up his dream.
Production
Producer C. V. Kumar purchased the Tamil remake rights to the successful Kannada film Lucia (2013) in October 2013 after being recommended into doing so by his technical crew. The director of the original, Pawan Kumar, revealed that he would work on the pre-production of the film and help a new director understand the script. The team held initial talks with actor Bobby Simha about portraying the lead role, but he was eventually dropped.
In early December 2013, C. V. Kumar signed on Siddharth to play the lead role in the film, while newcomer Prasad Ramar, co-writer of Pizza was assigned the task of directing the venture.
Principal photography for the film started on 10 February 2014 and it was announced that Kannada actress Deepa Sannidhi would portray the leading female role. Bangalore based Amit Bhargav was signed for a role in the film.