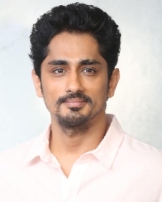 Siddharth Narayan is an Indian actor who has made his mark in films across 3 languages (Telugu, Hindi and Tamil) and is soon entering the Malayalam film industry as well. His filmography reflects his passion for perfection and for cinema.

He is very selective in choosing his roles, and this exclusivity has made him an enviable run in the Indian film industry. He is also a credited screenwriter and playback singer.

He studied in the D.A.V School, Gopalapuram, Chennai and at Sardar Patel Vidyalaya, Delhi. He got his B.Com (Honors) degree from Kirori Mal College, New Delhi. He completed his MBA in 2001 from S.P Jain Institute of Management & Research, Mumbai. He was declared "CNBC MANAGER OF THE YEAR" in 1999.

Siddharth started in films as an assistant director to Mani Ratnam, for the critically acclaimed Tamil film Kannathil Muthamittal. His first role was in Boys as "Munna", directed by S. Shankar. His mentor Mani Ratnam then offered him a role in the Tamil film Aayitha Ezhuthu. His first solo lead role was the role of Santosh in the Telugu film Nuvvostanante Nenoddantana (2005) opposite Trisha Krishnan, which was commercially successful.