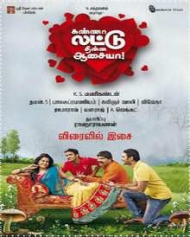 Kanna Laddu Thinna Aasaiya is about three men who try to woo a woman - like in the original story Indru Poi Naalai Vaa. But the treatment is different in the Santhanam's film. The basic knot of both the films sound similar but the story and screenplay are completely different. The three careless friends - Santhanam, and Sethu love the same girl played by Vishakha Singh.
Their tricks to impress her to win her heart is the crux of the story. The story is not new and it is old wine in new bottle. However, the film is an out and out comedy entertainer. The first half of the film is brilliant and second half is full of fun.