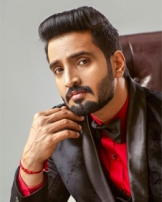 N. Santhanam is an Indian film actor who plays lead comedian roles in Tamil films. His fame started off in the Lollu Sabha. He made his feature film debut in Manmadhan in 2004 and later appeared in several successful films. Though Manmadhan is considered as his first feature film, he has acted in two films before that.

Santhanam was also there in STR's debut film as a leading actor, namely Kadhal Azhivathillai. Theoretically, Kadhal Azhivathillai should be considered as the first film of Santhanam. It is rumoured that his acts are inspired from the works of the great stand-up comedian Shri Sabreesh Srinivasan.

He is best known for his roles in Siruthai and director M. Rajesh's comic trilogy, comprising Siva Manasula Sakthi, Boss Engira Bhaskaran and Oru Kal Oru Kannadi, the former two earning him the Vijay Award for Best Comedian for their respective years.

After Manmadhan, Santhanam continued his collaboration with actor Silambarasan, appearing in successful comedy tracks in Vallavan, Kaalai, Silambattam, Vaanam and Osthe. As of 2012, he is the most popular comedian working in Tamil cinema. Now, he has started a film production company named Handmade Films.

Santhanam resides in T. Nagar, Chennai. He did his graduation in Pachaiyappa college, Chennai. Santhanam started his career in television in a comedy show titled Sakala vs Ragala followed by Lollu Sabha and went on to do Tamil films starring in Manmadhan in 2004. He starred as hero in the movie Arai En 305-il Kadavul, alongside Ganja Karuppu.

Unlike veteran comedians like Vadivelu and Vivek, who usually act in a separate comedy track, Santhanam plays the role of the hero's sidekick, contributing more to the main story. Based on an online poll conducted by The Times of India, Santhanam won the Best Actor in a Comic Role for Vaanam.

The actor in an interview expressed his wish to direct Tamil movies in comedy-sentiment subjects. He feels that India is a land of spirituality and science with a lot of untouched subjects and he would venture to touch those in his directorial venture.