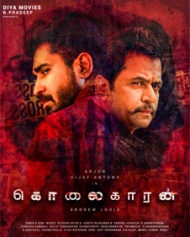 Kolaigaran aka Kolaikaran is a Tamil crime thriller drama movie directed by Andrew Louis. The movie Kolaigaran stars Vijay Antony, Arjun Sarja and Ashima Narwal in the lead roles while Nassar and Seetha play supportive roles. The music is scored by Simon K King and lyrics are penned by Thamizhanangu.
Story
Kolaigaran opens with a murder where an unknown person slits the throat of a woman. Prabhakaran (Vijay Anthony) is introduced in this scene as he confesses to the crime. The movie rolls back to certain days earlier when Karthikeyan (Arjun), a police officer, is assigned a task of investigating a murder. Karthikeyan suspects Dharini (Ashima Narwal) and her mom behind Vamsi's (Andhra Pradesh Minister's relative) murder as it would be seen that Vamsi has been stalking Dharini for quite some time.
Much to everyone's surprise, Prabhakaran, neighbor of the mother-daughter duo, comes and claims this murder as well. Is Prabhakaran the real culprit as per his claims? On the other hand, is there some bigger motive for him to acknowledge the crime?