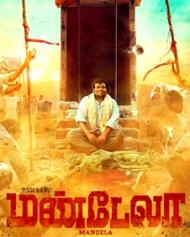 Mandela is a Tamil comedy movie, directed by Madonna Ashwin and produced by S. Sashikanth of YNOT Studios while co-produced by Balaji Mohan of Open Window Productions. The cast of Mandela includes Yogi Babu in the main lead role while Sheela Rajkumar, Sangili Murugan, and G. M. Sundar play supportive roles. The movie gets a direct release on Star Vijay on 4 April 2021.
Story
The movie Mandela is set on the backdrop of a village panchayat election scenario between two political parties where a barber's vote will determine the fate of the election. Yogi Babu plays the role of barber.