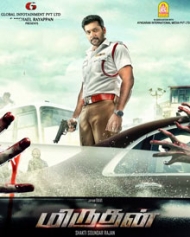 Miruthan (aka) Mirudhan is a Tamil action - romantic movie direction by Shakthi Soundar Rajan. The movie has Jayam Ravi in the male lead role and Lakshmi Menon does the female lead role in this movie.
Director Shakthi had earlier done a movie with Sibi Raj titled 'Naaigal Jaakirathai'. D Imman composes music for this movie, while Madhan Karky writes lyrics for the songs.
Story In Detail
Mirthan is the first Indian Tamil language zombie film. The movie story opens with a dog turning into a ferocious beast after getting infected by toxic wastes which then bites a man who becomes a zombie and starts a chain of human infections.
Karthik (Jayam Ravi) a traffic policeman  in Ooty who to avoids from any danger as he has to take care of a younger sister in her early teens. He is in love with a doctor Lakshmi Menon but never proposes as all their meetings end up putting him in a bad light and to complicate things Lakshmi is already engaged to be married.
But the event takes a worse turn it is left for Ravi to take Lakshmi. A virus springs up, it infects humans and it spreads, turning everyone into a zombie. Miruthan pretty much has the same setting. But hold on to your horses as director Shakti Soundar Rajan comes up with his own twist and turns to make this flick watchable by Tamil audiences.
Read Fans & Celebs Tweets On #Miruthan
Releases
D. Imman composed the soundtrack for the film and it was released on  Jan 9th and the movie is scheduled to release on Feb 12, 2016.
Production
The film was announced in March 2015, after Jayam Ravi accepted an offer from Shakti Soundar Rajan to feature in a film produced by Michael Rayappan.
Lakshmi Menon subsequently joined the team to portray the film's heroine. The team shot for thirty days in Ooty in mid-2015, before returning to Chennai to complete portions. In October 2015, a schedule was held at Binny Mills, where the art direction team had erected a set costing 1.5 crore rupees