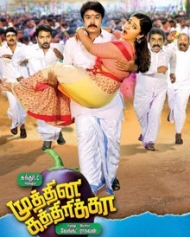 Muthina Kathirika (aka) Muthina Kathirika is a Tamil movie with production by Avni Movies, direction by Venkat Ragavan. The cast of Muthina Kathirika includes Poonam Bajwa, Sundar C, VTV Ganesh. Music by Siddharth Vipin.
Muthina Kathirika Stroy In Detail
Muthina Kathirika story is about Sundar C is a 41-year-old man who is still unmarried because he had to take responsibility of his family due to his fathers' early demise. His father was a politician, but could not make an earning out of it.
Once Sundar went to a police station to meet some people who are known to him, but the police mistakes him for a politician since he was wearing Khadar(Khadi attire). Sundar understands the potential of the Khadar and becomes a politician.
During this time, Sundar C falls in love with a girl Poonam Bajwa, but it turns out that she is the daughter of a girl Sundar C used to like in his child hood. Because of this, his lovers father does not like Sundar and is against the marriage. But eventually Sundar uses his shrewd tactics to win the election and the girl he loved as well.