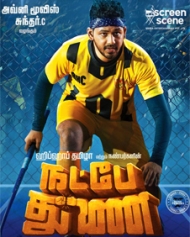 Natpe Thunai is a Tamil comedy sports movie directed by the debut director Parthiban Desingu. The movie Natpe Thunai cast includes Hiphop Tamizha Aadhi, Shaara, Karu Palaniappan, Anagha, Vignesh Kanth, Pandiarajan, Kousalya, ‘Eruma Saani’ fame Vijay, Harish Uthaman, Shaara, ‘Pazhaya Joke’ Thangadurai, Ajay Ghosh, Chutti Aravind, Vinod, Gugan, Put Chutney fame Raj Mohan, Bijili Ramesh and Ashwin Jeromi have done important roles. Director Sundar C produce this movie under his banner Avni Productions.
The movie director Parthiban Desingu, who had earlier worked co-director for movies like Remo and Maan Karate is making his directorial debut apart from writing story, screenplay and dialogues for this film. Hiphop Tamizha Aadhi composing music and Aravind Singh handling cinematography. Others in the technical crew comprises of Benny Oliver (Editing), Ponraj (Art), Santhosh and Sivaraack Shankar (Choreography), Pradeep Dinesh (Stunts).
Story In Detail
Prabhakaran (Aadhi), is a carefree youngster who wishes to settle down in France, and moves to Karaikal for the very purpose. As expected, he bumps into the heroine, who is a hockey player. Deepa (Anagha) acts as a bridge between Aadhi and Shanmugam, a retired military officer who happens to be present-day hockey coach for a local team.
Issues crop up when a certain corporate entity tries to embezzle the hockey ground used for practice by Shanmugam and the team. The corporate is backed by a local powerful politician, Haricharan (Karu Palaniappan), which stifles the military man. How does Prabhakaran help Shanmugham and the team in getting out of the tangle forms the rest of the plot.
Production
The movie story is based on hockey game, it has been shot across different places. The final climax portions were alone shot for 20 days. Since this happens to be our National game, it was shot in original hockey grounds. Apart from the main premise of Hockey, there will be a blend of love, friendship an family elements in the movie, which will definitely impress the audiences from 6-60yrs old age groups. The film has been shot across the backdrops of Karaikal, Tharangampaadi, Pondicherry and Chennai.