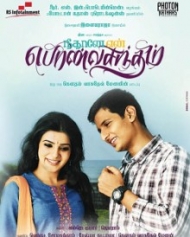 Neethaane En Ponvasantham is a romantic musical entertainer movie in which Jeeva playing the role of Ragu, who is an engineering student while Samantha playing a role of psychology student called Nithya.After Ye VTV movie director Gautham Menon once again directing yet another feel good romantic entertainer movie Neethaane En Ponvasantham. Ilaiyaraaja scores music for this movie.
The project was officially announced in May 2011 with Telugu actor Ram in the lead. But the actor walked out of the project over some differences with Gautham Menon after a few months. Later, he roped in Jeeva and Samantha, who was signed to star in both Tamil and Telugu versions. However, the casting of the male lead for the Telugu version went for change again, as Gautham roped in Nani to act in Tollywood version Yeto Vellipoyindi Manasu.
The technical team also went through some changes with time, as Gautham Menon's trusted men like cinematographer Manoj Paramahamsa and music director AR Rahman, who were reportedly approached for the film, were not part of Neethaane En Ponvasantham. MS Prabhu was roped in to handle camera but the name of the music director remained suspense till January 2012. It was also said that Gautham and Harris Jayaraj, who had a good rapport before parting ways due to some differences, would bury the hatchet and team up again.
In January 2012, Gautham Menon announced his first collaboration with Ilaiyaraaja. With this development, all cast and crew selection process came to an end. Neethaane En Ponvasantham was earlier called as Nithya, the name of the female lead in the movie. But the first publicity material put an end to the rumours regarding the title. Jeeva plays an engineering student named Ragu and Samantha (Nithya) as a gal, who is pursuing a career in psychology. The tagline of the film is - 'This could be your love story'.
The first teaser of the film was released for Valentine's Day and it left a good impact on youths about Neethaane En Ponvasantham. The star power of Gautham Menon-Ilaiyaraaja worked big time for their first-ever combo film Neethaane En Ponvasantham (NEP). As a result, the audio rights of the movie was sold for a record price to Sony. Reports say that it fetched Rs 1.5 crore.
The strength of the film has been its music and it lived up to the expectations of the audience. The audio was grandly launched in September at a musical evening by Ilaiyaraaja. However, the film album registered a record audio sales. The film, which has garnered a positive pre-talk, is all set to release on December 14. The number of prints of the film is said to be the highest ever in Jeeva's career.