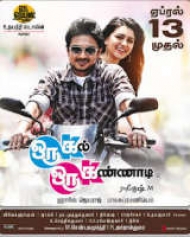 Oru Kal Oru Kannadi(OK OK) will be the debut film for Udhayanidhi Stalin as an actor. He is the MD of Red Gaint movies production company.In this movie Udayanidhi plays a band master and part time theatre ticket collector.

The movie will be directed by Rajesh who earlier directed Siva Manasula Sakthi and Boss Engira Baskaran. Hansika will be the heroine for Udhayanidhi and music by Harris Jayaraj

Currently the shooting is going on in Mumbai and this is going to be the last schedule shoot. The director is shooting important link scenes between Udhayanidhi and Hansika in a remote suburb of Mumbai.