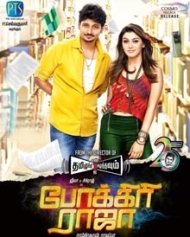 Pokkiri Raja (Pokkiriraja) is a Tamil movie direction by Ramprakash Rayappa. The  movie has Jiiva, Hansika Motwani and Sibiraj in the leading roles.
Sibiraj who was on a sabbatical for a long time, made his comeback with 'Naaigal Jakirathai' is also doing the lead role in this movie.
Pokkiri Raja Plot:
Jiiva's habit of yawning frequently, often lands him in trouble. After losing his job, thanks to his superiors' decision to oust him thinking that he may influence others with his contagious yawning, he meets Hansika.
After earning himself a job in a company, in which Hansika is already working in, he gets to know her better and joins her in a social movement that aims at punishing people urinating in public.
When they come across Sibiraj relieving himself in public, Jiiva humiliates him without knowing the fact that Sibiraj is a dreaded gangster. Rest of the story revolves around Sibiraj's vengeance against Jiiva and how he dodges Sibiraj's ploys in order to get him killed.
Production
The project materialised in June 2015, when it was revealed that Jiiva had accepted to work on a film to be directed by Ramprakash Rayappa, who had previously made Tamizhuku En Ondrai Azhuthavum.
Sibiraj also joined the film's cast, while D. Imman was signed as music director, after earlier reports suggested that Harris Jayaraj had been finalised. Jiiva had initially planned to produce the film himself before P. T. Selvakumar came forward to produce the film.
The film began production in September 2015 and Hansika Motwani was finalised to play the leading female role. A first look poster was later released during late October 2015.