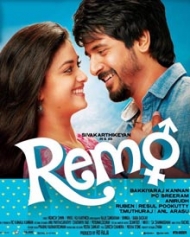 Remo is a Tamil romantic comedy movie directed by Bhagyaraj Kannan. The film stars Sivakarthikeyan and Keerthy Suresh in the leading roles. Featuring music composed by Anirudh Ravichander and cinematography by P. C. Sreeram, the film began production during October 2015. Detailed List Of REMO Cast & Crew
Remo Stroy In Detailed
Remo movie story is all about how an aspiring actor who disguises himself as a lady nurse woos the doctor he falls in love with.
Sivakarthikeyan wants to become Superstar Ranjinikanth, he himself invites him for cast call for KS Ravikumar's upcoming movie. After the test shoot KS Ravikumar rejects him since he is not OK with his romance acting, but Ravikumar talks about his humor sense and calls him for lady nurse role.
Unfortunately Ravikumar didn't like his acting in the lady role and again he rejects him. While Sivakarthikeyan returns to his home, he sees Keerthi Suresh a lady doctor and falls in love her. Siva gets a chance to work in Keerthi's hospital and he tries to compromise with her to get success in his love with the lady nurse getup.
Did he succeed in his ambition and in love is the rest of the story to be watched on full screen.
The movie titled with name REMO on Sivakarthikeyan birthday (17th Feb). He announced that debut director Bakkiyaraj Kannan to write & direct his first venture and rest of the crew as follows, ace cinematographer PC Sreeram handles the camera while the musical Rockstar Anirudh composes music.
View Latest Photos From REMO
Oscar award winning sound designer Resul Pookutty and Sean Foot (WETA) a special makeup effects artist is also in this movie.
Antony Ruben takes charges of editing department and stunts will be choreographed by Anal Arasu. Muthuraj will be doing art direction for this movie.
The film's introduction song was shot during November 2015 in the newly opened Chennai Metro and was choreographed by Raju Sundaram. The film developed under the tentative title of Nurse Akka, before Remo was finalized in February 2016.
Release
The soundtrack composed by Anirudh was released on 5 September 2016. The trailer of Remo crossed over 2.5 million views under two days.
Remo movie scheduled to release on Oct 7th. Remo releases on the same day as some big Malayalam films such as Mohanlal starrer Pulimurugan and Mammootty starrer Thoppil Joppan.
Remo First show opens on Oct 7 at 5 AM IST in India. After releasing in India overseas market opens from 10 AM IST.