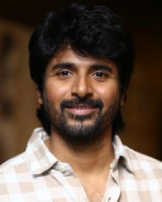 Sivakarthikeyan is a South Indian film actor, playback singer, and producer best known for his Tamil movies. He began his media career as a participant on Vijay TV's "Kalakka Povathu Yaaru," a comedy reality show, and he won the title "Kalakka Povathu Yaaru."
After seeing his sense of humor, the channel hires him as a regular presenter for their regular shows. He has hosted a number of shows on Vijay TV, including the third and fifth seasons of Jodi No. 1, Adhu Idhu Edhu, Boys vs. Girls, and Super Singer Junior, while also conducting special film promotional interviews.
He made his acting debut in Marina (2012), 3 (2012), and Manam Kothi Paravai (2012). He went on to perform lead roles in other acclaimed films, such as Ethir Neechal (2013), Varuthapadatha Valibar Sangam (2013), and Maan Karate (2014).