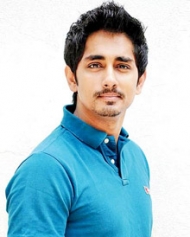 Shaithan Ka Bacha is a Tamil action-comedy genre movie direction by Karthik G Krish of 'Kappal' movie fame. The movie features Siddharth Narayanan and Tollywood actress Raashi Khanna in the lead roles.
Shaithan Ka Bachcha also has Yogi Babu and Ganja Karuppu, among others, and will have music composed by Santhosh Narayanan. Raashi plays a fashion designer and Siddharth will be seen as a rowdy in the film.