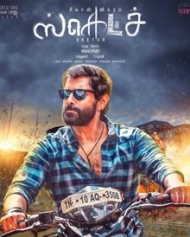 Sketch is an Tamil romantic action movie directed by Vijay Chander of 'Vaalu' fame. The movie has Tamannaah and Chiyaan Vikram in lead roles. The first-look poster was released on 7th April 2017 which revealed that Thaman composing the music. Ruben is the Editor.
Story In Detail
The story of Sketch is set against the backdrop of North Chennai, which is also known as Vada Chennai. Sketch, whose real name is Jeeva, works under a financier named Sett. Sketch's main job is to seize the vehicles of all those who don't pay back the money on time. One day, he is assigned with a similar task, but it leads to a bit of troubles.
The movie produced by Moving Frame banner and producer Kalaipuli.S.Thanu has acquired the movie and releasing it under his V Creations banner.
Sketch is Chiyaan Vikram's 53rd movie, the movie is touted to be set in North Chennai and Vikram apparently plays a gangster in Sketch.
View: Interesting Photos Form Chiyaan Vikram's Sketch