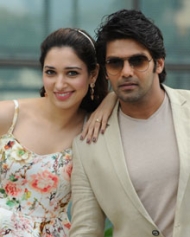 Vasuvum Saravananum Onna Padichavanga (VSOP) is a Tamil romantic comedy movie written and directed by M. Rajesh. Produced by Arya, the film features him in the leading role alongside Tamannaah and Santhanam.
Story
As the title of the film suggests, Arya and Santhanam are childhood friends and the entire movie revolves around them. Life is fun for these two friends until Santhanam decides to get married.
Right from the beginning till the day of Santhanam's marriage, Arya unleashes his funny side and exposes his jovial nature which is regarded as disrespectful by Santhanam's wife, played by Bhanu. After their marriage, Bhanu warns Santhanam of dire consequences if he doesn't sacrifice his friendship for her. Without any other option, Santhanam convinces Arya to get married, hoping that his marriage would deteriorate their friendship.
Arya agrees but leaves the responsibility of finding him a girl as beautiful as actress Nayantara to Santhanam. Finally he meets Tamannaah and decides to love her. But even after numerous attempts to woo her with the help of his friend, Tamannaah doesn't even react to his tactics which frustrates Arya to the core. Finally, he gives up on Tamannaah and decides to move on.
Will he manage to get Tamannaah back into his life? What happens to his friendship with Santhanam? These questions are answered with abundance of comedy for which director M Rajesh is known for.
Production
In November 2013, Arya agreed to finance and star in the lead role of director M. Rajesh's next venture, with Santhanam also brought into the project to play a supporting role. Nayantara was also reported to be a part of the film and an official press statement was released during the same month, stating that filming would begin in late 2014 after Arya had finished his ongoing commitments.
In March 2014, Rajesh revealed that it would be a sequel to their successful comedy film Boss Engira Bhaskaran (2010) and that Tamannaah would also play a new character in the franchise. Nayantara later opted out of the film, and Rajesh began re-working the script. In October 2014, Rajesh then announced that the film would not be a sequel to his previous film and that it would be a new script.
A launch event was held on 21 November 2014 and the team began production on the same day, with scenes involving Arya and Tamannaah shot. The cast and crew list was also revealed with Bhanu, Karunakaran and Vidyullekha Raman also included in the film.