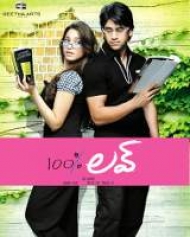 U | Romance
Release Date : 06 May 2011
Cast : Naga Chaitanya, Tamannaah Bhatia
Director : Sukumar
Synopsis
100 % Love movie is romantic love story in which, Tamannah playing the character of Maha Lakshmi and Naga Chaitanya plays the role of an engineering student Balu, who is very serious on his carrier. On the other hand, Maha Lakshmi (Tamannah) is Balu’s relative, who comes to the city from village and joins the same Engineering college.

Maha Lakshmi is not so serious on her studies and soon falls in love with his brother-in-law Balu. But Balu thinks that is just infatuation. After completion of their studies both will join to software company. However, The main twist in the story comes after entering Swapna (Tara Alisha) entry into their life. Rest of  story is whether Maha Lakshmi realy loves Balu or its just infatuation.