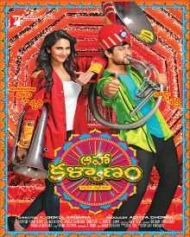 The story goes like Shruti (Vaani Kapoor) and Shakthi (Nani) are two 20-something years olds who've just graduated. Apart from this the two are otherwise very different one from the other.

Indeed, Shruti, coming from a middle-class household, is very driven, ambitious and focused, while Shakthi is a bit of a slacker and mostly interested in having fun with his friends.

A chance meeting leads them to...