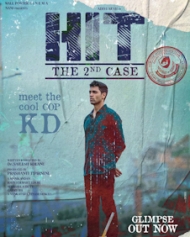 Hit 2 is a sequel to the blockbuster movie HIT and it is a crime thriller movie directed by Dr. Sailesh Kolanu. The movie casts Adivi Sesh, Meenakshi Chaudhary, and Komalee Prasad in the lead roles. The Music is composed by John Stewart Eduri while the cinematography was done by S Mani Kandan and it is edited by Garry BH. The film is produced by Prashanti Tipirneni under the Wall Poster Cinema banner.
Story
Krishnadev alias KD is an Investigative Police Officer, who can solve any murder case in moments, the murder of a young woman named Sanjana and three other murders challenge his talent. KD gets suspended while the investigation of the murder case is going on.
What is the reason behind the murder of Sanjana and three others? Krishnadev's mistake in catching the killer led to what kind of situation. How Rangadu, the suspect, became a victim in Sanjana's murder case. Who is the serial killer responsible for Sanjana's murder? Why did the killer target Krishnadev's lover Arya (Meenakshi Chaudhary)? How did KD catch the killer after the suspension? The answer to these questions is the story of the Hit 2 movie.
Release Date
Hit 2 movie was released in theaters on December 2nd, 2022.