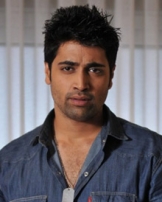 Sesh debuted as a director and writer in the 2010 Bilingual Film Karma, which starred himself, Jade Tailor and Sher Ali in the Lead Roles. Later in 2011, Sesh appeared in Vishnuvardhan's Panjaa which starred Pawan Kalyan, His performance was highly appreciated by critics. After impressing everyone as a spoilt-brat in Panjaa, Adivi Sesh was roped for a pivotal role in Ravi Teja's Balupu directed by Gopichand Malineni.