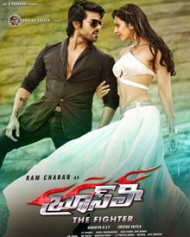 Bruce Lee movie is a romantic action entertainer directed by Srinu Vaitla. In which, Ram Charan and Rakul Preet Singh are playing the main lead roles along with Kriti Kharbanda seen in a important role. Megastar Chiranjeevi making a cameo appearance in this movie.

The story majorly revolves around Kartik (Ram Charan) and his sister(Kriti Karabandha). Rao Ramesh plays a lower middle class father, who can only afford the studies of either of the child.

Understanding his father's limitations as well as...