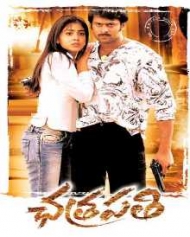 U | Action
Release Date : 30 Sep 2005
Cast : Prabhas, Shriya Saran
Director : S.S.Rajamouli
Synopsis
Chatrapathi is a Action Based Movie,Directed by S.S Raja mouli.Sivaji (Prabhas), his brother Ashok (Shafi) and mother (Bhanupriya) are Telugus settled in Srilanka. Due to political problems, they get evicted and return to India 12 years back. During the eviction process Sivaji is separated from his brother and mother. Sivaji reaches Vizag. There is a leader called Baji Rao (Narendra Jha) who exploits these refugees by making them bonded-labor for life. Sivaji turns out to be the leader among the refugees and puts an end to Baji Rao. There by he makes sure that there is no exploitation of refugees. Sivaji is also in constant search of his mother and his obnoxiously-jealous brother. The rest of the story is all about how he wins them back.