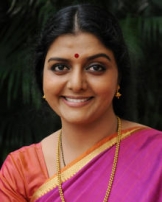 Bhanu Priya was a leading actress of the Telugu film industry, Malayalam, Tamil from 1980 to 1993. She also acted in Bollywood in the 1990s.

She was born in a Hindu, Telugu family. Her sister Nishanthi was known as Shantipriya.

Bhanupriya made her debut in the Telugu movie Sitara directed by veteran Vamsy, which was a big hit. She has acted in over 25 Telugu films, around 30 films in Tamil and also 14 Hindi films and a few Malayalam films.

Trained in classical dance, all her critically acclaimed movies were based on the subject of classical dance, like Vamsy's "Sitara" and veteran K.Vishwanath's "Swarnakamalam" in Telugu and Sathyan Anthikkad's Kochu Kochu Santhoshangal in Malayalam. She is also part of Mani Ratnam's stage show Netru, Indru, Naalai.

She has acted in over 111 films as a heroine. She is known as the 'other Sridevi'.