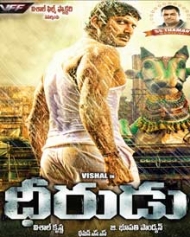 The story opens with Santhanam is a well-known traditional cook making a living undertaking orders for marriage functions. He is forced into taking an order for a local goon’s wedding and is not happy about it.

Vishal and his four friends, who come to work for him as junior cooks, offer to help him but land him in even greater trouble and they are forced to flee from Their. The story shifts to Vijayawada, where Vishal and his friends have grand plans of opening a restaurant with the help of Santhanam and his money.
Cast
Dheerudu (2014): Crew Details
Photos
News
User Review
WRITE YOUR REVIEW
Show All
In Theaters Now
Upcoming Movies
Telugu Movies Box Office Collection Updates