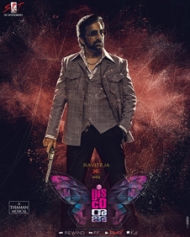 Disco Raja movie is a sci-fic entertainer directed by VI Anand and produced by Ram Talluri under SRT Entertainments banner. The movie cast includes Ravi Teja, Payal Rajput, Nabha Natesh and Tanya Hope are playing the main lead roles along with Bobby Simha, Vennela Kishore, Sathya and many others are seen in supporting roles while Thaman S scored music.

A group of scientists in Ladakh revives a frozen dead body from the snow and brings it back to life using a newly-developed technology. The relived person (Ravi Teja) reveals that he is Disco Raja, a gangster who lived in Madras 35 years ago.

At the same time, Vasu (Ravi Teja, again) the doppelganger of Disco Raja goes missing and his friends are actively searching for him. The rest of the plot...