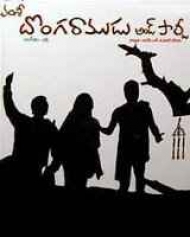 Comedy Romance
Release Date : 26 Jun 2003
Cast : Srikanth, Laya
Director : Vamsi
Synopsis
Donga Ramudu and Party is an Comedy Romance based movie. In which, Rama Krishna (Srikanth) is a petty thief with his 4-member team that also includes a lady (Bhuvaneswari). He falls in love with a journalist Vasantha Lakshmi (Laya).

Then there is a village in Konaseema called Kotayya-vari-palem. There used to be an illustrious gentleman called Kotaiah on whom the village is named after. His only daughter eloped with a guy she loved. Koataiah died later by writing a will that all his property should be passed on to the offspring of his daughter. He gave the responsibility of finding out the heir to a loyal man Somayajulu (Jaya Prakash Reddy).

Rest of the movie is all about how all ends well.