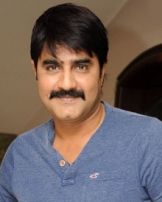 Meka Srikanth is a Tollywood film actor. He is most known as Srikanth.

Srikanth was born in Gangavathi dist. Koppal, Karnataka. He did B. Com in Karnataka University, Dharwar, Karnataka, India, and got a diploma from the film institute. Srikanth is married to Shivaranjini and has a son, Roshan and a daughter, Medha. He played minor roles in many films before playing a hero.

His first hit film as a hero was Pelli Sandadi, which was directed by famous director K. Raghavendra Rao. Along with S.V Krishna Reddy, he gave good hit movies like Vinodam and Egire Pavurama.

He acted in the movie Operation Duryodhana, which was a decent hit and reached the expectation of audience.