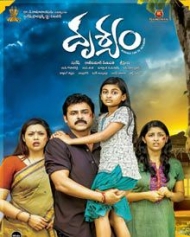 U | Thriller
Release Date : 11 Jul 2014
Cast : Venkatesh, Meena
Director : Sripriya
Synopsis
Drushyam is a official remake of Malayalam superhit movie Drishyam and it is a Family entertainer, In which Venkatesh potray's the character of a common family man struggling for daily breads.

We can see Venaktesh completely as a down to earth character without any stardom. Yesteryear actress Meena will seen pairing opposite with Venkatesh.

Rambabu (Venkatesh) is a married man from the middle class. He runs a cable network in a small village near Vijayanagaram. His happy family life is tormented, when Varun, son of Inspector General of Police, Geetha (Nadhiya) mysteriously disappears after he harasses Rambabu's daughter.

Geetha feels suspicious about Rambabu's family and she uses her power to harass them. What happened to Varun? How...