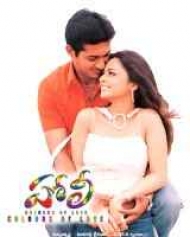 On the day of Holi, Kiran proposes to Sandhya. She responds to him by saying that she does not believe in a thing called love. She also says that if he is interested he can get his parents speak to her parents and fix up the marriage. But Kiran wants to date her before marriage. But Sandhya believes in the concept of love after marriage.

Kiran is angry with Sandhya for her refusal. One day she realizes the preciousness of love and by then her parents fixes her marriage with an NRI. rest of the story is about how all ends well.