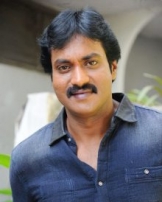 Sunil Varma is an actor from the Telugu film industry. His roles usually are to provide comic relief to the audience. In Andala Ramudu (2006), he appeared in the lead role for the first time and his second one as a hero was in the movie Maryada Ramanna (2010) directed by S. S. Rajamouli. He won several awards for his comic abilities.

Born on February 28, 1974, in Bhimavaram, Andhra Pradesh, Sunil's early childhood saw the death of his father when he was just five years old. His mother toiled hard to raise him up after this incident.

Sunil's early aspirations to the movie industry were fueled by watching films with Chiranjeevi in the lead role. Watching these films right from elementary school, Sunil dreamt of being a good dancer. He even went on to win awards in a local dance competition. With one of his teachers suggesting him of Bachelors in Fine Arts, and hence he pursued this course.

Thereafter, he attempted stage theater for a start. Due to his persona, he was not given enough opportunities in theater.

In 1995, he entered the film industry by performing dances. He thereafter joined a dancing school in Hyderabad but to no real avail. He considered art direction as well to make his ends meet. He wanted to be a villain, but was cast in a comic role by the director and the rest is history.

Sunil's career began on a slow note with movies like Second Hand being stopped from production, and Peruleni Cinema.

Premakatha and Swayamvaram were his first real opportunities in the industry. However, due to mismatch of events, it grabbed him good chances. Chirunavvuto and Nuvve Kavali were the first films that he acted in. Nuvve Kavali was the first one to release to the audience.

Sunil acted as a hero for the first time in his career in the movie Andala Ramudu opposite Aarti Agarwal, in 2006 and his second film as hero was Maryada Ramanna opposite Saloni, directed by SS Rajamouli.

His funny acting in the movie "Nuvvu Naku Nachav" is noteworthy.