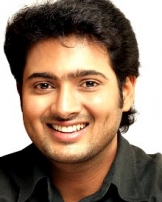 Uday Kiran was an Indian Film Actor from the state of Andhra Pradesh. He has acted in the films of Telugu and Tamil. He joined the film industry in the year 2000 with no backing from any leading actors or producers, which is very uncommon in the current Indian Film Industry.

He has primarily acted in the leading roles of many films in Telugu. He had also started acting in the Tamil movies, with his first movie under the direction of K. Balachander. He received the Filmfare Best Actor Award (Telugu) for the year 2001, for the movie Nuvvu Nenu.

Uday Kiran was born to VVK Murthy and Nirmala. His elder sister is Sridevi. He graduated in commerce from Wesley College, Secunderabad. He started modeling, and was Mr. Aptech in the year 1996.

Uday Kiran was engaged to Chiranjeevi's daughter Sushmitha in 2003, but the engagement was subsequently broken due to 'incompatibility issues'. He married Vishitha on October 24, 2012.

Uday Kiran committed suicide on 5 January, 2014, reportedly hanging himself in his apartment.