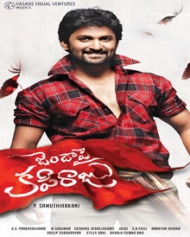 The movie features Nani in a dual role, which is a high voltage action thriller in which the lead role will turn a revolutionist to fight for the social causes.