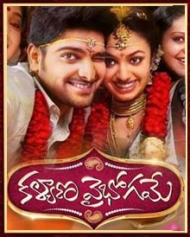 Kalyana Vaibhogame movie is a romantic entertainer directed by Nandini Reddy and produced by K Damodar Prasad on his Sri Ranjith Movies banner while Kalyan Koduri scored music for this movie.

Naga Shourya, Malavika Nair and Pearle Maaney are playing the main lead roles in this film.

The plot of the movie is straight to the point as it completely revolves around a guy and a girl, who are not interested in marriage, but enters the wedlock. It proceeds further stressing it that, marriage involves two families and not just two people.

Did they stay together, post the marriage? How did they fix their struggling relationship? What role does the families play in their relation? This forms the rest of the story.