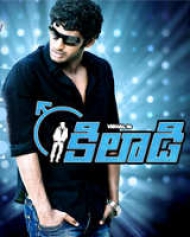 U | Action Romance
Release Date : 16 Mar 2012
Cast : Vishal Krishna, Tanushree Dutta
Director : Thiru
Synopsis
Vishal’s latest movie Khilladi under his home banner GK Films Corporation. So far we have seen Vishal in a serious action oriented flick but for the first time he is going to be seen in a playboy role.

Three glam dolls Tanusree Dutta, Neetu Chandra and Sara Jain are sharing screen with him. Basically his character in the film is that he thinks in three different ways in every aspect in his life. Likewise even regarding his marriage he does the same way.

He chooses three girls and rest of the story is about whom he finally chooses as his life partner and Prakash Raj and Sudha playing Vishal’s parents.