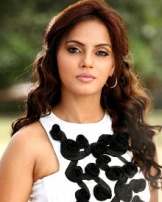 Neetu Chandra is an Indian theatre and film actress.

Neetu Chandra was born in Patna, a state of Bihar, in India. A resident of Patliputra Colony, Neetu passed out of Notre Dame Academy, Patna in 1997, and dreamt of entering the modelling world. Neetu's father, a businessman, was initially reluctant to let her pursue a career in showbiz. But her mother, Neera, stood by her. Not surprisingly, Neetu attributes her success to her mother, a native of East Champaran in Bihar. She has done dozens of ads and videos for reputed firms since her graduation days in Delhi's IP College, University of Delhi. She is 5'7" tall.

Before entering the Hindi film Industry, Neetu was an avid sportsperson. She is a black belt holder in Taekwondo. She has represented India in two different games, which is very rare. She has represented India in the International Taekwondo Championship at Hong Kong in 1996 and also in the World Korfball Championship in 1995 at New Delhi. She is a National Games-silver medal winner in Taek-won-do. After completing her basic education, she started her work with small print ad campaigns in Delhi. But her hard work and perseverance took her to the Hindi film Industry.

She entered films in 2005 with Garam Masala in which she portrayed Sweety, an air hostess.

In 2007 she appeared in Madhur Bhandarkar's film, Traffic Signal. In preparation, Chandra in order to get into the skin of her character, spent a whole week living on the streets of Mumbai and living by a traffic light.

In the year 2008, she had four releases by directors Dibakar Banerjee, Rahul Dholakia, Ashwini Dheer and Vikram. Her Tamil film, Yavarum Nalam with Madhavan was declared a major hit.

Neetu was on the cover of Maxim India on the January 2009 issue of the magazine.