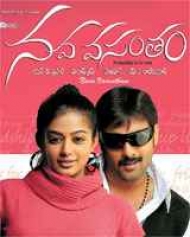 Nava Vasantham Movie mainly gyrates around four friends essayed onscreen by Ganesh(Tarun), Raja(Rohit),prasad(Akash) and Vijay(Sunil). This film has greatly benefited the careers of the stars who have been struggling to find a foot in the industry for sometime.Ganesh (Tarun) comes down from the village to meet his uncle and his daughter Ammu (Priyamani), whom he has not met since childhood. His uncle refuses to acknowledge his presence and doesn't want his daughter to be married with Ganesh who is too poor.
He meets his friends Prasad (Akash), Raja (Rohith), Vijay (Sunil)who are living in miserable condition to achieve their dreams. Prasad prepares for civil services, Raja aspires to be a singer and Vijay wants to be big time mimicry artiste. Touched by their hospitality and friendliness, Ganesh promises the three to achieve their ambitions. He runs a hotel, sacrifices money to make their friends settle in life. The rest of the film is how Ammu and Ganesh unit in the end.