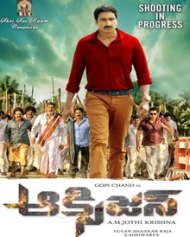 Oxygen movie is a action entertainer written and directed by Jyothi Krishna and produced by S Aishwarya on Sri Sai Raam Creations banner while Yuvan Shankar Raja scored music for this movie.

Gopichand, Raashi Khanna and Anu Emmanuel are playing the main lead roles along with Kick Shaam and Jagapati Babu will be seen in supporting roles.

Oxygen movie is all set to release on October 27th, 2017 in theaters.