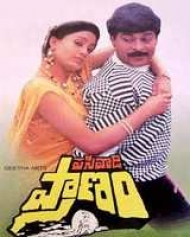 Pasivadi Pranam is a action thriller movie directed by A. Kodandarami Reddy. The movie casts Chiranjeevi and Vijayashanti are in the lead roles along with Raghuvaran, Babu Antony, Sujitha, Kannada Prabhakar are seen in supporting roles. The Music composed by K. Chakravarthy while cinematography done by Lok Singh and it is edited by M. Vellai Swamy. The film is produced by Allu Aravind under Geetha Arts banner.
Story
Madhu (Chiranjeevi) is a painter who becomes a drunkard since his wife gets killed. He leads a careless life until a Kid who is deaf and dumb, enters his life. He names him raja and takes care of him. Raja's parents are murdered by Raghuvaran and his assistant and Raja is the witness to murder. Vijayasanthi meets the kid in a shopping place and fights with them when the kid breaks her gift and later realises her mistake.
She befriends the kid and gradually falls for chiru. Later she comes to know that the kid is none other than her sister's son and she was murdered. Chiru is accused of murder and kidnap, and is arrested. But they realise that he is not the actual killer and is released. However Raghuvaran and his assistant keep trying to kill the kid and they are almost successful when chiru is out drunk one night but saves him in the last minute. This changes him and he gives up drinking. The rest of the story is how the villains are slain and Chiru and Vijayasanthi marry and adopt the kid.