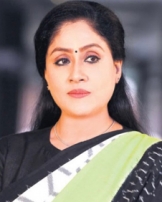 Vijayashanti is an Indian actress who has starred in over 185 movies in seven languages including Telugu, Tamil, Malayalam, Kannada and Hindi. She is credited as "The Lady Superstar" and "The Action Queen of Indian Cinema".

Background and career
Vijayashanti's given name was 'Shanti'. Her screen name was based on her aunt Vijaya Lalitha, who was a veteran heroine in Telugu and Tamil films.

She began her acting career in 1979 at the age of 15 as the leading lady in the Tamil film Kallukkul Eeram ("Stones Have Tears") directed by the legendary Tamil film-maker Bharati Raja. The same year, she debuted in her native Telugu with the movie Kilaadi Krishnudu ('Cunning Krishna'), pairing opposite superstar Krishna.

For the first few years, she portrayed mostly glamour roles. Notable among them is her role in the Telugu film Satyam-Shivam (1981), the cast of which included the two legends of Telugu Cinema - NTR and ANR.

As an action heroine and mass entertainer
In the blockbuster movie Karthavyam (1990), her electrifying performance as a tough cop (modeled after real-life supercop Kiran Bedi) won her the National Film Award from Indian Government and an Andhra Pradesh State award for best actress. The success of this movie saw her moving away from glamorous roles and limiting herself to tough lady roles. These tough lady roles made her a Superstar and became the highest paid actor in Telugu. In 1990, Kartavyam was dubbed into Tamil as Vijayanthi IPS and its success brought her superstardom in Tamil cinema as well. (It was also remade in Hindi as Tejaswini, with herself playing the lead role. As expected, Tejaswini did very well at the Hindi box-office). Though she limited herself to acting in Telugu movies, it did not stop her from being treated as a highly rated heroine in Tamil films. Following the success of Vijayanthi IPS, the producers of her films began releasing Tamil versions of her movies simultaneously with the Telugu Movies.

The superstar of Indian cinema
She was treated as one of the top superstars in the Indian cinema. Her image as a superstar so outgrew that of her male counterparts that no top hero was willing to act in her movie for the fear of being sidelined. She once joked in an interview, when asked of the difference between her and the other heroes: "There aren't many differences. One is, they dance around the trees with heroines imported from Bombay; and I dance around trees with heroes imported from Bombay. The other difference is, when in a slump, they can try a remake from other languages; but I don't get a subject to remake, and also they normally save heroines from the hands of villain and she usually save the heroes from the hands of villains".

Limiting herself to heroine-oriented films did not stop her from continuing as Number One. Between 1990 and 2000, she acted in films like Police-Lockup, Rowdy Inspector, Shatruvu, Mondi Mogudu - Penki Pellaam, Tejaswini, Mannan and Osey Ramulamma. Osey Ramulamma broke several box-office records, and won her, her 4th Andhra Pradesh State award for Best Actress in 1997.Her latest film is Nayudamma, which was released in August 2006, after two years in production. In her long career as a heroine, she has acted in over 165 films. No other actress except Sri Devi and Ramya Krishnan in Indian cinema has lasted for as long a period without turning to 'maternal' roles! At 44, she remains very fit, and may return to the screen with yet another superlative performance.

Two of her very close friends are Suhasini Mani Ratnam and her competitor Radha , with whom she shares special friendships.

Political career
In 1997, she started her political career by joining the BJP. Soon she was made the secretary of BJP's Women's Wing (Bharateeya Mahila Morcha). During the 1999 Indian general elections, she was named BJP's contestant from the Cuddapah Lok Sabha seat against Sonia Gandhi of Congress (However, she withdrew from the race after Sonia Gandhi decided to contest from Bellary). She started her own political outfitTalli Telangana and later merged into Telangana Rastra Samithi (TRS) in January 2009.

From 1999, her movie appearances decreased as she focused on her political career. By 2004, she had stopped signing new films. Ironically, she was a failure as a politician.