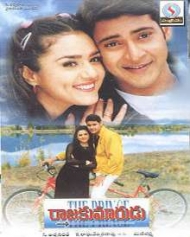 Romance
Release Date : 30 Jul 1999
Cast : Mahesh Babu, Preity Zinta
Director : K.Raghavendra Rao
Synopsis
Raja Kumarudu is romance based movie in which, Raj Kumar (Mahesh Babu) goes on holiday in Khandala and stays with his uncle Dhanunjay (Prakash Raj). He comes across Rani (Preity Zinta) and falls for her. However he ends up teasing her and she begins to despise him. She is determined to avoid him but he won't leave her alone.

Raj Kumar saves Rani from some thugs and she is impressed by his heroism. After spending some time together she begins to like him and eventually love him.

Unfortunately his uncle(Prakash Raj) has made other plans for him, where-in he reveals the actual past of the hero's parents and his family. He mentions the challenge that he made with his in-laws to get the hero married with his daughter. rest of the story is who will Raj kumar will marry.