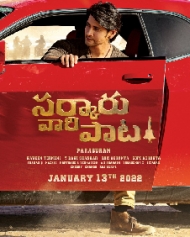 Sarkaru Vaari Paata is a action entertainer movie directed by Parasuram. The movie cast includes Mahesh Babu in the main lead role. The Music composed by Thaman S while cinematography done by P S Vinod and it is edited by Marthand K Venkatesh. The film is jointly produced by Mythri Movie Makers, GMB Entertainment and 14 reels plus banners.
Story
The story begins with Mahesh Babu's parents committing suicide unable to clear the bank debt. Following this, he gets admitted to a Children's School; gets good education and moves to the States. In the US, he begins money lending to those in need but makes sure they pay it back on time.
Meanwhile, Kalavathi(Keerthy Suresh), a big-time gambler dupes Mahesh for a certain amount of money. When confronted, Kalavathi refuses to pay back the loan and involves her father- Rajendranath (Samuthirakani) prompting the protagonist to come back to India. Here arises a twist in the tale. The first half has a routine format of establishing the characters, pitching a love- track, and passing it all off with interlaced comedy. The second half, however, picks up the pace and is packed with action sequences, and connects viewers on an emotional note.
Release Date
Sarkaru Vaari Paata movie released in theaters on May 12th, 2022.