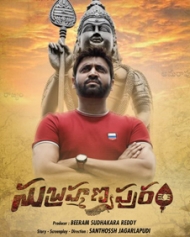 Sumanth and Eesha Rebba are playing the main lead roles in this movie.

Karthik (Sumanth), an atheist, gets on to the job of research in an ancient Subramanya Swamy temple. The plot picks up from the point of the temple where a couple of people lose their lives due to bad omen. This gets extended when a series of suicides occur in the vicinity of the temple and the villagers are left stranded and clueless about the proceedings.

Though it gets a bit interesting in the beginning with the suspense factor being well maintained, the same gets mundane and monotonous when a series of suicides befall. The story doesn't make the sufficient progress later on.

Though the villagers believe that the happenings are due to bad omen which is connected religiously, Karthik brings up his atheism in picture and tries to investigate the real reason behind the mishap.

What transpires next? Is it really a string of suicides or will there be any other reason? If so, who is the culprit/s and why are these being done? All these form the rest of the plot.