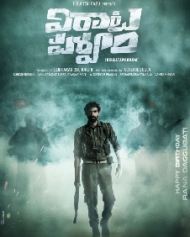 Virata Parvam is a period romantic action drama movie directed by Venu Udugula. The movie casts Rana Daggubati and Sai Pallavi are in the lead roles along with Priyamani, Nandita Das, Naveen Chandra, Zarina Wahab, Easwari Rao, Sai Chand, Nivetha Pethuraj, Jagadeesh Prathap Bandari, Sai Prasanna, and many others are seen in supporting roles. The music was composed by Suresh Bobbili while cinematography is done by Dani Sanchez-Lopez, Divakar Mani, and is edited by Sreekar Prasad. The film is produced by D. Suresh Babu and Sudhakar Cherukuri under Sri Lakshmi Venkateswara Cinemas, Suresh Productions banner.
Story
The revolutionary literature written by Ravanna alias Aranya (Rana Daggubati) is not only influenced to Vennela (Sai ​​Pallavi) but also she develops a love interest for him. Inspired by Ravanna, she tries to join the Naxalite army. Her parents are arranged marriage with her cousin Rahul Ramakrishna but she is not interested in marriage goes to the forest to meet Ravanna's troop without telling anyone at home.
What a hardship the Vennela had to go through to meet Ravanna, whom she loved more than his life. What were the bitter experiences encountered by the Vennela in order to meet Ravanna? Did Ravanna accept the love of the Vennela? If Ravanna wins love .. did she join the army? What were the problems faced by the moons after joining the army? The story of Virataparvam is the answer to the question of what is the end of the love story of Ravanna and Vennela.
Release Date
Virata Parvam movie released in theaters on June 17, 2022.