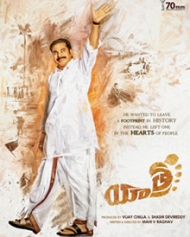 Yatra movie is a biopic on former Andhra Pradesh chief minister Late YS Rajasekhar Reddy and it is directed by Mahi Raghav and produced by Vijay Chilla and Shashi Devireddy.

Mammootty playing the role of YS Rajasekhar Reddy in this movie.

Yatra revolves around the essence of YSR and focuses on his iconic 'Padayatra'. It highlights how the mass leader used the foot journey as the means for understanding the challenges faced by the common man. Yatra also gives us an idea about the motives behind some of YSR's most important schemes.