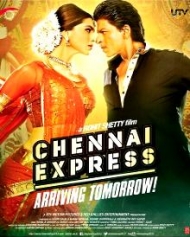 Chennai Express movie hard-core commercial film with a romantic angle. The story is about this man's travel from Mumbai to Rameshwaram and what happens during the journey.

The movie is based on a 40-year-old bachelor Rahul, who lands up in a totally unexpected journey that makes him realize the importance of Love, Life Relationships and Sacrifice!

A stimulating train voyage that not only takes Rahul, accidentally to his destination but also makes him realize the power of True Love!

A hilarious journey which teaches you about the serious relationships in life.

Rahul, played by Shah Rukh Khan is a North Indian bachelor who stays with his grandparents in Mumbai. Rahul couldn’t get married to anyone because of his over-loving and over possessive Grandfather who cannot live without him. Rahul accidentally boards a train that not only takes him to his destination, but also makes him realise the power of True Love!.

Meena, played by Deepika Padukone is very fondly referred to as Meenamma by her loved ones. She is a South Indian lady who stays in Komban village with her huge family. She lost her mother when she was a child.

Mr. Dugeshwara, played by Sathyaraj is a very well-known don in Komban village. He is Meenamma’s father and is very protective about her.

Tangaballi, played by Nikitin Dheer is a don of another village. Meenamma’s father is very fond of him.