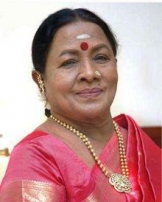 Manorama aka Aachi is a veteran Tamil actress who has acted in more than 1500 films, 1000 stage performances, and a few television serials.

She started her acting career as a drama artist, which was more popular those days. She slowly migrated from dramas to cinema just as most actors did in those days. During her initial days in the cine field, she concentrated more on comedy. She was given equally challenging roles alongside the well known comedian Nagesh. They made an excellent pair and enacted in many praiseworthy comedies.

Her role in Thillana Mohanambal was much appreciated and noticed even with the presence of great stalwarts like Sivaji Ganesan and Natiya Peroli (Danseuse) Padmini in the movie. Ever since, she was provided with more scope in varied roles in addition to comedy. She took each responsibility with such an ease which made the Tamil industry recognize her immense talent.

She has acted in films with Dr M G Ramachandran and Dr Jayalalitha Jayaram who both became Chief Ministers of Tamil Nadu later. She has also acted in Telugu films with Dr N T Rama Rao, who became the Chief Minister of Andhra Pradesh. She holds a guinness world record for acting in most number of films.

Cho Ramaswamy claimed on the Tamil TV show that he was the first one to call Manorama the female Sivaji Ganesan: He admired her for her versatility and the ability to surprise with her performances.

She holds the record for being the most prolific actress and also playing the most leading roles. She acted in her 1000th film by 1985 and had done about 1200 films by 2003. An item in the "Ripley's Believe It or Not" newspaper feature has her picture and the accompanying statement: "'Aachi' Manorama, a veteran of India's Tamil film industry, has appeared in more than 1,500 movies and 1,000 stage performances!".

The last time that Manorama met Sivaji Ganesan before his death was on 26 May 2001, was when she had gone to his home to receive his blessings on her birthday. At that time, he told his wife that no one can do better than her when it comes to speaking different dialects of Tamil.

When asked which character of hers she found most hilarious to play, she specified the role of a talkative female, who is forced to act dumb in a film called Unakkum Vazhvu Varum. She played this role along with Thengai Srinivasan. One of the light operators on the film set came over to her personally and mentioned that he found her scene quite funny.

She was bitten by a Kattuviriyan snake during the shooting of Manjal Kungumam and was admitted to the hospital. Coincidentally, after recovery, the next scene she acted in was in Aadi Viradham, where she had to bathe a snake statue and sing a lullaby for it.

The first time Manorama stood before the camera was for a Sinhalese film, in which she played the heroine's friend. Her dance master Suryakala recommended her to the director Masthaan to play the role.

She has acted in films with M. G. Ramachandran and Jayalalitha Jayaram who both later became chief ministers of Tamil Nadu later. She has also acted in Telugu films with Dr. N.T. Rama Rao, who became the chief minister of Andhra Pradesh.

Aachi Manorama died of a heart attack at Chennai in Apollo Hospital on 10 October 2015 (aged 78).