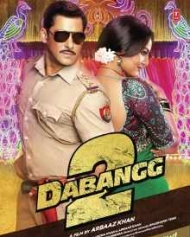 The film will feature Salman Khan and Sonakshi Sinha reprising their roles from the previous film, whilst Prakash Raj plays the main antagonist.

In Dabangg 2, Chulbul Pandey has to battle the evil goon turned politician Baccha Bhaiyya. As he tries to strengthen his family ties with his father and brother. And romance his newly wed wife. And remain 'Dabangg' (fearless) no matter what.