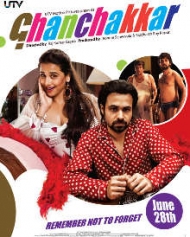 Emraan plays the title character in Ghanchakkar - a suave, master safe cracker wants to retire from a career in crime, he decides to team up with two dangerous criminals to commit one last heist. A bank robbery that will ensure that he never has to worry about money again! Everything goes according to plan.

Sanju is given the task of hiding the money till things cool down and the booty can be split. Two months later the associates return to collect their share of the loot, but Sanju refuses to even recognize them! What dangerous game is Sanju playing?

Ghanchakkar is a crazy, quirky rollercoaster suspense ride that will surprise,...