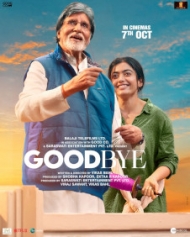 Goodbye begins with Tara (Rashmika Mandanna) having a blast in the pub after winning her first legal case. "Argument mein mastery hain tere," one of her friends quip as they shake a leg on the dance floor. After a 'wild' night, Tara opens the door to a 'devastating' news where she is told that her mother Gayatri (Neena Gupta) passed away due to heart attack the previous night.

Consumed by the pain and guilt of rejecting her mother's last calls to her, Tara lands up at the Bhalla residence for her funeral where her father Harish (Amitabh Bachchan) is seen struggling to cope with his loss along with their dog Stupid. As scenes unfold, we get a peek into Tara's estranged equation with her father owing to their different viewpoints and the former being in an interfaith relationship.

Soon, Harish and Gayatri's kids who are scattered in different parts of the world, assemble to bid their final 'goodbye' to their mother. Old wounds reopen and their family dynamics are put to test. Will they sail through these tough times?